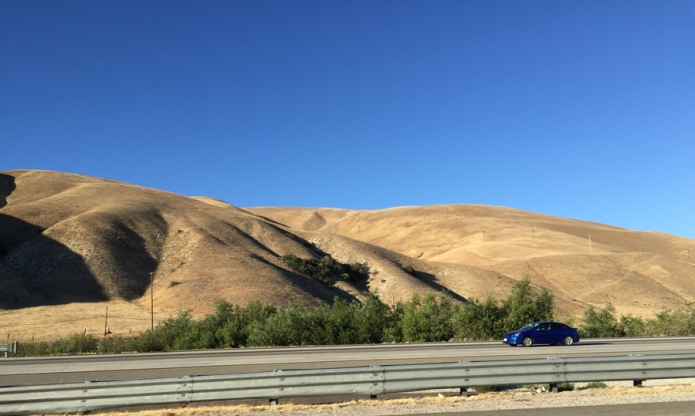 Being in nature offers an epic way to get out of this modern, urban world crowded by our own manic minds, the invasive psychic energies of others and the omnipresent information barrage from electronic communications …

Though we walk on the Earth we easily dismiss it … Like fish who don’t recognize water, we are immersed in a miraculous world that we barely see as we sleepwalk in overstimulated artificial environments.

In need of an antidote, I drive away from LA’s seemingly endless sprawl, with a deep sigh of relief. Though I’ve left mid-afternoon on a Wednesday, I find myself crawling through traffic thick with commuters. In a surrealistic slow motion parade, we funnel up Highway 5 on this ten-lane conveyor belt past Magic Mountain, the stronghold of crazy city dwellers out for a thrill.

Magic Mountain marks one edge of the sprawl. Once past this iconic playground, nature’s marvels unfold on the 5 corridor – a scenic passageway where Christo’s Yellow Umbrellas once unfolded, up through dramatic Gorman Pass winding into the magical azure blue Pyramid Lake, and the fertile Central Valley, food basket to America.

Eventually the traffic thins and golden teddy bear fur hills softly fold away from my windshield. Musical interludes carry cosmic messages as this road trip unfolds. I will celebrate the milestone of 62 years with an open-ended solo camping trip to the mysterious Giant Sequoia forest where I anticipate a major shift in consciousness.

As my friend Karina so aptly wished me … May I find a way of inhabiting my body differently to explore a fresh perspective. The alchemy of sleeping on the earth will transmute my scattered urban consciousness into golden strands of ease, surrender, peace.

Arriving at Buckeye Flats just as a windy bluster begins climbing across the eastern sky, I rush to secure my tent. Just in time with the help of the bearded neighbors, the tent is staked and the clouds burst, sending campers into vehicles to wait out the storm. Steamy windows and pounding rain are strangely comforting. The weather settles down just in time to fix dinner in the fading twilight, and my first night begins. Seventeen days later, I will emerge, refreshed, carrying the canopy of the Sequoia sky as a protective cape back to the city. My musings capture snapshots of my magical sojourn.

Celebrating my birthday at Buckeye Flats with drumming, campsite dinner, and a beautiful sunset.

Enjoying a cool morning on day 2 of what became a 17-day trek.

The natural world of wonder eternally unfolds in vast enveloping waves spreading out before beneath within me. Sun and rain drench every pore. 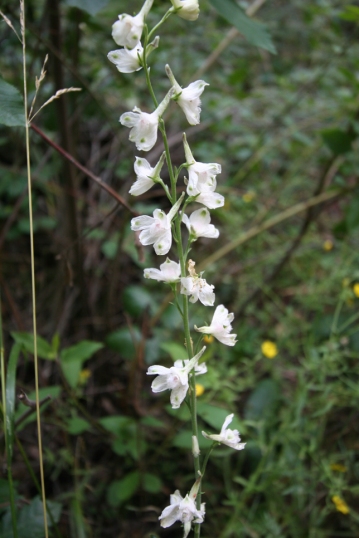 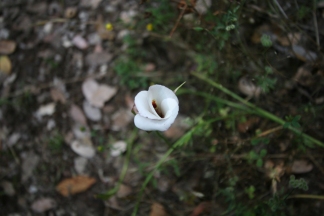 Taking on my longest hike – 9 miles to Mist Falls at Roads End, Kings Canyon – I trip 3 miles in, on my own shoes. Lucky I only scrapped an arm, got a palm full of gravel cuts. Picked myself up, glad I had a first aid kit, cleaned up and determined to keep on. I look up, and there is a rainbow cloud, inspiring courage and resolve to reach deep inside and find strength. Well rewarded with awesome vistas in Muir’s Sierras.

Evening on edge of meadow, playing of resonant buffalo drum attracts mystical bats. Swooping down to me, I hear their primordial squeaks and swirls.

The night descends as tents glow like candles among the ancient everlasting trees. Surrendering into the night and sleep, adventurers explore inner depths, anticipating the break of dawn that inevitability follows, no matter how deep the dark.

Eternal cycle continues. Be quiet. Listen and celebrate all that feeds us. Ragged soul, holy spirit and sacred body.

I’m finding a great reprieve in setting up a tent and simplifying life. For me, camping is a form of running a way from home, like this fellow blogger so aptly describes. http://thegription.com/bikepacking-is-running-away-from-home-for-grown-ups/

As a reward for my passion for nature, Spirit has gifted me with a new part time gig with outdoor adventure store, REI. They’ve opened a new place in my hometown, Woodland Hills, and welcomed me into the tribe as a Green Vested Inspired Guide. (Just like the one featured in A Walk In the Woods Robert Redford movie! Very funny! )  Grand opening is this weekend, Sept. 18 to 20, 2015. More to come on that front.

But I’ve reached the shore after a 3-year long hiatus. Thanks to Spirit, Goddess and Guardians. So many people responded to my solo adventures, asking me was I not afraid. Truthfully, I felt safer, more fully alive and IN my BODY than ever before. I will be planning more adventures, and bringing willing takers along with me when the time comes.

Blissed out on a hike somewhere in Sequoia land

In the riverbed at Kings Canyon

Down home cooking with a dutch oven

At the top of the canyon viewpoint trail

What a job this gal has – looks like she enjoys it thoroughly! 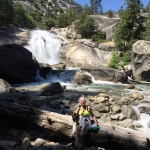 Rainbow cloud sends me along the trail after a nasty fall.

The trees are so magical

So happy to see these critters enjoying life.

Perspective is hard to gauge in this giant forest.

Campfire at Lodgepole at the waterfall site.

so lucky to be at Azalea Campground meadow.

Can you believe this view!

One thought on “Sequoia beckons: Antidote to urban angst”

Error: Twitter did not respond. Please wait a few minutes and refresh this page.

feminismandreligion.wordpress.com/
Through the eyes of a passerby

Travel Destinations By 7:AM

"Here is my secret. It is very simple: It is only with the heart that one can see rightly; what is essential is invisible to the eye.."- Antoine de Saint Exupéry